On 5 August 1918, Wellington newspapers screamed "MURDER MOST FOUL" and "ANOTHER FOUL CRIME" above stories which told of a "HOSPITAL SHIP TORPEDOED" resulting in "HUNDRED AND FIFTY PATIENTS KILLED".

According to the Evening Post, "The torpedoed hospital ship was the Warilda (7713 tons, owned by the Adelaide Steamship Company). A hundred and twenty-three lives were lost." This quite overlooked the conflict between the headline figure (150) and the figure in the story.

The Dominion, on 7 August, reported "Details of the occurrence show that the attack on the Warilda ranks among the worst of the German outrages. A large proportion of those on board were cot cases. The ship was attacked in mid-Channel early on Saturday morning, in black darkness. By the greatest of good luck the Warilda kept afloat long enough to allow the great majority to be transferred to the lifeboats, and later to destroyers, which came promptly on the scene. The submarine's torpedo wiped out one ward." 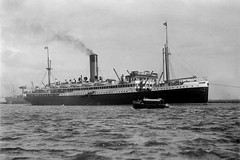 HMAS Warilda
By August 7, the Evening Post was able to find some solace in details: "HEARTBREAKING SCENES", "TERRIBLE SUFFERINGS OF THE WOUNDED", "GLORIOUS BRAVERY DISPLAYED."

It's report said "The seamen aboard the Warilda said it is impossible to fully realise the terrible sufferings of the wounded during the hasty removal, their helpless anxiety making it difficult to keep cheerful amidst the general confusion, when it is remembered how even the slightest movement seemed to cause pain as they were gently placed aboard on Friday. It is marvellous how they bravely bore up under their midnight experiences. It would have been the height of folly to use lights, therefore the transference was undertaken with the maximum of difficulties. There was no panic, but accidents were bound to happen. One or two boats were overturned while launching, and the crippled occupants struggled in the water until picked up. The captain remained on the bridge until the last."

"The torpedo crashed in the starboard side, smashing the engines and dynamos, stopping the machinery immediately."

"Eye-witnesses pay a warm tribute to the Army medical men in the rescue work, everyone strictly following the orders, "Wounded first!" Glorious bravery was displayed by small parties who continually went below and reappeared carrying the wounded, although they neyer knew when the vessel would take the final plunge. When every movable case was cleared the captain called for volunteers to remain and listen in the darkness for a short time for cries for help. Ten gallant men promptly stepped forward and searched the vessel from end to end as far as her sinking condition permitted."

HMAS Warilda
"The missing include Mrs. Violet Long, deputy chief controller of the women's corps. She was one of the founders of the movement."

But it was also able to recount that "The rescue work on the Warilda was extremely difficult and hazardous. Owing to the explosion carrying away the companionway and smashing the eye ward to bits, it was almost impossible to succour the blinded and semi-blind men, who groped about in darkness in swirling waters until carried off their feet and drowned."

It wasn't until 10 August that the Auckland Star was able to report the names New Zealanders were looking for. "The names of the men are Privates A.H. Temperley[?], J.J. Knox. J.J. Melrath[?] and J. Everett. So far as is known they were the only New Zealanders involved in the disaster, though others may have been in the hospital ship and come off unscathed."

Of those 4 New Zealanders, J.J. Knox was John James Knox, of Wellington.

All references are to newspapers published at http://paperspast.natlib.govt.nz/