John Robert (Jack) Murrell was no exception. Indeed there is a case to be made for saying he was the best. But unfortunately, WW1 cut short his all-too brief life and career. But not before he made his mark.

Amongst his climbing companions was Edgar Williams. Together they ascended Mount Elliott in 1917. The following is a report of that expedition written by Williams as a tribute to his friend.

THE FIRST ASCENT OF MOUNT ELLIOTT.

Written for the Otago Daily Times.
BY Edgar R. Williams

Ye are bound for the mountains—
Ah, with you let me go
Where your cold distant barrier,
The vast range of snow.
Through the loose clouds lifts dimly
Its white peaks in air—
How deep is their stillness!
Ah! would I were there! 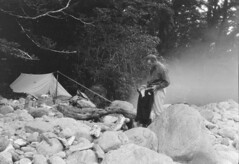 Leaving the Te Anau-Milford track at 1 o’clock on a midsummer afternoon, from the point where it crosses Roaring Creek, 2595 feet above sea level, my friend the late Jack R. Murrell, of Manapouri, and myself ascended to the apex of the big pile of moraine under the great precipice of Mount Elliott so familiar a feature in the vieW from MacKinnon’s Pass. A sharp descent of 60 feet of loose moraine, a crossing of the stream, and the ascent proper began. At first this was up some hundred or more feet of bare rock, which more or less formed the bed of the stream. The route now bore more to the left up very steep slopes covered with short, green vegetation and mosses all dripping wet. From a close examination through the binoculars from MacKinnon’s Pass these slopes had looked as though they might prove somewhat difficult, from Roaring Creek the prospect of getting up was more hopeful. Well, taking the heavy swags and the damp state oi our clothing into consideration, this perhaps the most difficult part of the climb. The holds were very few and far between, and were mostly hidden away beneath the vegetable growth, which in itself afforded no security whatever and had often to be torn away to expose the rock. After a few hundred feet of this came an easy snow-grass covered slope leading higher up to a scree slope which also presented no difficulties. Up to this point we had been bearing to our left, but now we encountered more bare rock, the route leading away to the right to some ice lying at the foot of a small couloir, where we filled our billies and water-bottles as we should probably find no water higher up. Now, turning sharp to the left, we walked along steep, crumbly rock slopes to a point on the southern ridge, some distance from the main portion of the mountain on our right. 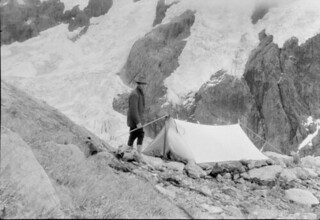 Once we were over the ridge the toil of the day was at an end and a glorious panorama lay spread around us. Close on (jinr right lay the bold peak of Elliott towering 1500 feet above us, his smooth, bare walls giving promise of a tough climb on the morrow, while peeping through the blue haze in the dim distance to the north and immediately to the left of Elliott in the panorama rose the stupendous peak of Tutoko (9042 ft). In this direction we were looking straight down the Arthur Valley towards Milford Sound, while more to the left and behind the nearer range, clear cut against the sky, rose that inaccessible range the Llawrenny Peaks. Continuing to the left came the Terror Peaks and Mount Edgar and that pretty peak, The Lady of the Snows, while farther round in the west all was a rosy glow. The sun set in a huge pot of molten iron, which in reality was a bank of fog lying over the ocean and visible through the low saddle at the head of the Arthur Valley. To the south, and now being bathed in the grey shadows of evening, was our old acquaintance Balloon Peak, while beyond, on the far side of the Clinton Canyon, was to be seen that rugged peak the Castle. Alas! we cannot linger, and after hastily taking a few photographs we again shouldered our rucsacs [sic] and moved on along the ridge to a suitable spot to bivouac. This we found at 5 p.m. at an elevation of 4935 feet — about half way between the peak and where we had come on to the ridge. The western side of the ridge consisted for the most part of easy slopes, covered with long snow-grass, so that we had no difficulty in finding a good place to pitch our little alpine tent. The stars were now twinkling above us, and after satisfying the inner man with soup made on our spirit stove, we settled ourselves comfortably in our sleeping bags and were soon in the land of dreams. 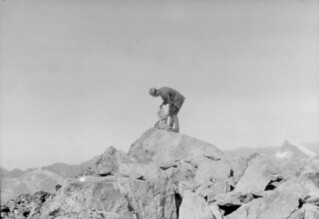 Leaving camp at 6.30 next morning we Worked along steep, snow-grass covered slopes to some scree slopes lying at the foot of the precipice on the north face of the mountain, which all the while looked defiantly down on us. A little distance along the face we found a couloir leading straight to the summit ridge, and up this we climbed. The approach was wide and open and covered with loose stones. As soon as we got into the couloir itself we found ourselves face to face with the difficult rock problem of which one sees pictures in books on mountaineering. The nature of the climbing varied from a chimney which was ascended by the back and knee method to a place where the only hold was a crack into which we had to thrust our hands. By closing our fists, which would swell our hands, we were able to secure the hold that we required. The couloir ended at the foot of a small precipice which was surmounted by “Jack” only through his ascending my shoulders and upstretched arms. Afterwards he assisted me with the rope. On reaching the crest of the arete a more wonderful sight than that offered in the view before us could not be imagined. In the centre of our picture rose Balloon Peak, while on either side the valleys — the Clinton and the north branch — were filled to the level of their passes with a billowy sea of fog, out of which stood the tops of the distant mountains like so many islands. To the right of Balloon Peak was M’Kinnon’s Pass, over which the fog was rapidly drifting and melting away like some phantom waterfall. Several hundred feet immediately below us lay the Jervois Glacier, while far below that again we could see Roaring Creek and the Milford track, whence we had come the day before. The cameras became busy, of course, but there was little time to spare for we could not yet see our goal, nor could we estimate what difficulties might lie on our path along the arete. Shortly afterwards, at a quarter to nine on the morning of February 21, 1917, we were shaking hands on the summit of Mount Elliott. This was the realisation of our hopes of many years. We had made a prior attempt in 1914, but had been foiled by adverse weather conditions, and had climbed Balloon Peak instead. 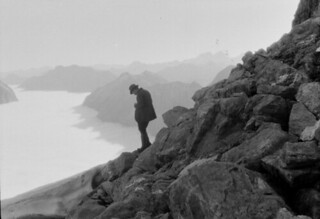 Our barometer registered the summit of Mount Elliott as 6260 feet above sea level. The day was perfect, with not a cloud in the sky nor a breath of wind. We occupied ourselves for nearly two hours on the summit in taking photographs and compass and clinometer readings and in scrutinising the distant peaks through the binoculars. Words can hardly describe the magnificent view that lay stretched beneath us. Away in the south-west wo could just distinguish the mountains around Lake Manapouri, the rugged masses of the castle blocking some of them from our view. The castle is the highest peak in the district and must be close on 7000 feet. Moving our field of vision in a westerly direction we beheld Mount Daniell, with Lake Quill set like an emerald between it and Mount Hart, while below the upper portion of the great Sutherland Falls could be seen tumbling over the precipice into the depths of the valley. To the west and nor’-west splendid views were obtained across the Arthur Valley and up the tributary valleys on the other side. These will provide a fine field for some future explorations. Tutoko, 17 miles distant, presented a magnificent spectacle from this elevation, towering far above all the lesser giants around Milford Sound. The southern slopes of Tutoko were a chaos of icefalls uniting the ice-cap with the Age Glacier far beneath. Before departing for the lower levels we built two cairns, one on the highest point and one that should be visible from M'Kinnon’s Pass, from which point it would appear on the extreme right of the summit ridge. The descent was accomplished without serious difficulty. The rope was used in several places by looping it on projecting rocks, thus enabling us to descend on its two free ends and pull it, down afterwards. This is a handy method, but can only be used in descending. On arrival at the camp at 11.45 a.m. we enjoyed what we felt to be a well earned rest, sitting in the welcome shade of the tent and admiring the view. After striking camp we descended to the track, following the same route as that by which we had gone up, except near the bottom, where we deviated to our left to avoid the troublesome moss-covered rocks. We lingered not at Roaring Creek for the heat of the afternoon sun was intense, but picked up some gear which we had cached there the day before, and followed the track down to Beech Huts, where we arrived in good time to cool down and have a delightful bathe in the creek before tea. In an attempt in 1914 Murrell and I had reached the Jervois when the clouds descended upon Mount Elliott. This caused us to make a dash for the little sugar-loaf peak - between Mount Elliott and Balloon Peak — which also was a first ascent, and which we named Mount Wilmur, a combination of our names. 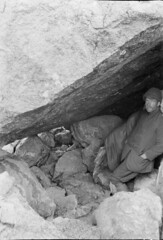 The foregoing is a tribute to the memory of my friend, Jack Murrell. This was the last of our mountaineering expeditions together. Shortly afterwards he obeyed his country’s call, and fell near Gauzecourt Wood, on September 8, 1918. 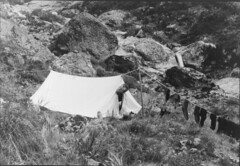 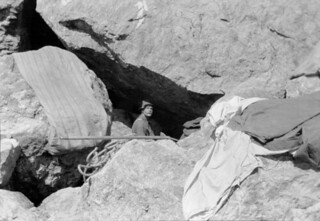 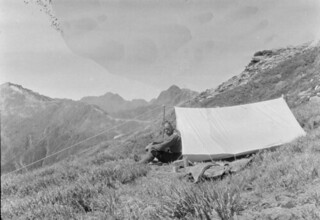 John Robert (Jack) Murrell, sitting outside a tent on a mountain slope, at camp on Mount Elliot, Southland 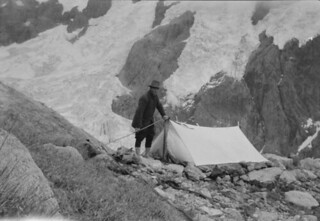 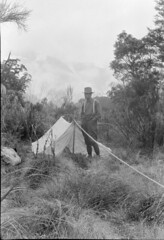 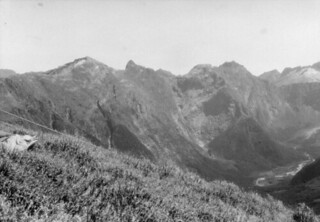 Grassy mountain slope, with guy rope, campsite of John Robert Murrell and Edgar Williams during ascent of Mount Elliot, with view of valley below, and surrounding mountains 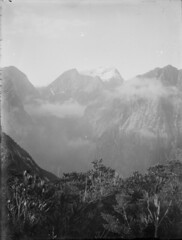