The Wilmot Pass is a 671 m (2,201 ft)[1] high pass on the main divide of New Zealand's South Island. It connects Doubtful Sound, a deep indentation in the coast of Fiordland, to the valley of the West Arm of Lake Manapouri. The pass is named after E. H. Wilmot, a former surveyor-general of New Zealand, who had noted it while surveying the area in 1897.[2] It lies between Mount Wilmot and Mount Mainwaring. On the east side the Spey River drains to Lake Manapouri and on the west side the Lyvia River drains to Deep Cove.[3].

" ... it was not until 1888 that Major Goring, J. White, and Professor Mainwaring Brown went up the Spey river and Disaster Burn and camped below a pass leading to Smith Sound. Rain fell heavily and oppressed by tent life the professor went for a stroll and never returned. His companions searched for days and found no trace of him except a mountain lily he had broken from its stalk. After snow fell on the pass, they returned to civilisation and Messrs Ernest Mitchell, Barber, Dore, and Murrell left immediately intending to go to Smith Sound, for there was just a chance that the professor had made for the food depot at Deep Cove. They reached the last camp, saw the broken mountain lily, and went to the watershed, finding Lake Mainwaring en route. The pass was waist deep in snow and only Barber and Murrell reached it to see in the distance the waters of the sound. Nothing more could be done and they returned to the lake, where they met a large organised expedition from Dunedin."[4] Mount Mainwaring, on the north side of the pass, is named in his honour. 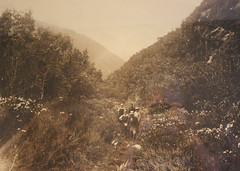 Robert Murrell was the first European to ascend the pass while searching for Mainwaring-Brown the same year.[5] E. H. Wilmot, who was to become Surveyor General of New Zealand in 1914,[5] surveyed the area extensively in 1897. Tracks were cut to both Doubtful and Dusky Sounds and huts established, but these fell into disrepair. In 1921 Leslie Murrell established a tourist lodge at Deep Cove, reopened the track and conducted walking trips from Manapouri.[5] The Manapouri-Doubtful Sound Tourist Company later took over operations, building additional huts.